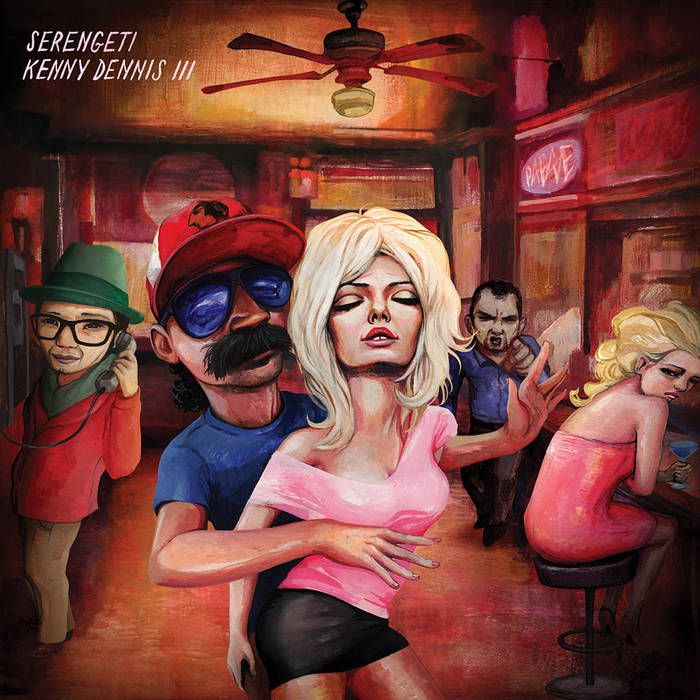 Joe Kurtenbach this album gives me the tickles in all the right places. and when I turn it up , girls look at me. when I play this at house party's, people dance. some even took their denim off. and it was fancy denim. Jordache I bet. I would recommend this to anyone who loved crystal clear Pepsi and garbage pail kids. Favorite track: No Beginner.

shmoops What an amazing voice and flow on this guy. So much personality comes through these characters that Serengeti creates until you're part of his world. Favorite track is Tanya T for Kenny's amazing accent and how he just keeps getting angrier and angrier throughout the track. Can't get enough of it! Favorite track: Tanya T.

Austen These beats are insane, will make you get the hell down. serengeti's voice and flow is killer and his story about doing stuff with Kenny is funny and weird as shit. Gotta love it, especially on green highlighter vinyl!

If you’re unfamiliar with the saga of Serengeti’s beloved Bears-worshipping creation, this could seem confusing. You’re essentially a child walking into the middle of a Wesley Snipes and Ving Rhames flick without popcorn or plot. The shorthand is that Kenny Dennis is a cross between Ron Swanson, a Bill Swerski superfan, and the best Golden Age rapper that you never heard. The more nuanced truth is that the KDz is totally singular.

Kenny Dennis is the most whimsical, hilarious, and strangely poignant fictional character in hip-hop history—a true blue collar hero of modernity. But on the Joyful Noise-released KD LP III, the thick-‘stached Chicago MC is shouldering a mid-life crisis. He’s afraid that his best times are past him. He’s hanging around new friends to the chagrin of his family.

As the record unfolds, we learn about the ferocious Bennies (Benzedrine) addiction that Kenny battled from the 70s through the 90s. Using O’ Douls to cap his addiction, he’d kicked it for good by the time Michael Jordan, Scottie Pippen, B.J. Armstrong, and Horace Grant led the Bulls to their first run of championships. However, it’s gradually resurfaced as Kenny spends more and more time with his new pal, Joji.

The result is the deepest examination into the character’s scarred psyche. What started as a softball-loving and Shaq-hating everyman played mostly for laughs has evolved into a three-dimensional old friend. He’s idiosyncratic but struggling with problems that you can relate to: substance abuse, familial strife, and the struggles of your local sports team.

Of course, this is still Kenny Dennis and Serengeti. For all the pathos, it’s one of the funniest and best albums of the year. Narrated by Kenny’s long-time ally and rap partner, Ders (Anders Holm from Workaholics), the KD LP III alternately tells the tale of Perfecto, the pair’s group that sweeps malls across the Midwest. They wear Aeropostale, Abercombie & Fitch, and biker shorts. They put their own spin on the hip-house of Technotronic and Snap. They’re about to be a phenomenon when a phone call changes their career trajectory forever.

You can compare Serengeti to Beck or MF Doom or Andy Kauffman. You can bring up effusive praise from The Guardian to Pitchfork to the dean of rock critics, Robert Christgau. But no nodes of comparison or clever similes can grasp the blend of bizarre non-sequiturs, clever references, and heartfelt songwriting that makes this special. So just take a seat, tune in, and have a time.

Bandcamp Daily  your guide to the world of Bandcamp